Saw this while blog hopping at Stop by with Di

Here are the rules: Bold the things you’ve done and post on your blog!

1. Started your own blog
2. Slept under the stars
3. Played in a band
4. Visited Hawaii
5. Watched a meteor shower
6. Given more than you can afford to charity
7. Been to Disneyland
8. Climbed a mountain
9. Held a praying mantis
10. Sang a solo
11. Bungee jumped
12. Visited Paris
13. Watched a lightning storm at sea.
14. Taught yourself an art from scratch
15. Adopted a child
16. Had food poisoning
17. Walked to the top of the Statue of Liberty
18. Grown your own vegetables
19. Seen the Mona Lisa in France
20. Slept on an overnight train
21. Had a pillow fight
22. Hitch hiked
23. Taken a sick day when you’re not ill
24. Built a snow fort
25. Held a lamb
26. Gone skinny dipping
27. Run a Marathon
28. Ridden in a gondola in Venice
29. Seen a total eclipse
30. Watched a sunrise or sunset
31. Hit a home run
32. Been on a cruise
33. Seen Niagara Falls in person (from both sides)
34. Visited the birthplace of your ancestors (one side from England)
35. Seen an Amish community
36. Taught yourself a new language
37. Had enough money to be truly satisfied
38. Seen the Leaning Tower of Pisa in person
39. Gone rock climbing
40. Seen Michelangelo’s David
41. Sung karaoke
42. Seen Old Faithful geyser erupt
43. Bought a stranger a meal at a restaurant-- no but I have paid for a strangers fuel before
44. Visited Africa
45. Walked on a beach by moonlight
46. Been transported in an ambulance
47. Had your portrait painted
48. Gone deep sea fishing
49. Seen the Sistine Chapel in person
50. Been to the top of the Eiffel Tower in Paris
51. Gone scuba diving or snorkeling
52. Kissed in the rain
53. Played in the mud
54. Gone to a drive-in theater
55. Been in a movie--does my highschool graduation tape they made count :S
56. Visited the Great Wall of China
57. Started a business
58. Taken a martial arts class
59. Visited Russia
60. Served at a soup kitchen
61. Sold Girl Scout Cookies
62. Gone whale watching
63. Got flowers for no reason
64. Donated blood, platelets or plasma
65. Gone sky diving
66. Visited a Nazi Concentration Camp
67. Bounced a check/cheque
68. Flown in a helicopter
69. Saved a favorite childhood toy-but lsot it to a lousy roomate and I still miss it so much
70. Visited the Lincoln Memorial
71. Eaten Caviar
72. Pieced a quilt
73. Stood in Times Square
74. Toured the Everglades
75. Been fired from a job
76. Seen the Changing of the Guards in London
77. Broken a bone
78. Been a passenger on a motorcycle
79. Seen the Grand Canyon in person
80. Published a book--notyet but I have had poetry published
81. Visited the Vatican
82. Bought a brand new car - will never do that again!
83. Walked in Jerusalem
84. Had your picture in the newspaper
85. Kissed a stranger at midnight on New Year’s Eve
86. Visited the White House
87. Killed and prepared an animal for eating
88.Had chickenpox
89. Saved someone’s life
90. Sat on a jury
91. Met someone famous --lol Little Richard :S
92. Joined a book club
93. Got a tattoo--10
94. Had a baby
95. Seen the Alamo in person
96. Swam in the Great Salt Lake
97. Been involved in a law suit
98. Owned a cell phone
99. Been stung by a bee

What I got accomplished today

Well I am glad that I got more accomplished today than I thought I would or had planned to. I still have oodles that are really on my to do list though that I have not done, :P. However I did get this done...

I sewed binding to the charity quilt that I am like way behind on, will get it sewn down by tomorrow afternoon and mailed this week. Which is good. Will post pic when done.

I sewed binding onto a wall hanging that I have had AROUND FOR YEARS. I found it while reorganizing and playing etc. I plan on hanging it in the bathroom for it will create a theme and I have fabric for a curtain picked out already, also had it around or a good bit. I will post a pic and more on that when I hang it up.

I did laundry...yes yes FUN!

I bought tickets for the movie tomorrow night.

I got three more plastic bins of fabric reorganized and to be taken downstairs for keeping. That makes 9 so far and I need to purchase two more and I have three sitting in the floor in the dining room still.

Yes..while reorganizing, I picked fabric for a new project (sigh). It is going to be a New York Beauty, and I am using some perfect pastels by Robyn Pandolf. They are many years old now. So although a new project started, will be all fabric from the stash! :D

...I think that is all the major stuff. OH AND I BLOGGED :P
Posted by Desiree at 7:55 PM No comments:

I had a drop spindle class last month and made my very own yarn from wool roving. At the moment it is hanging over my sink in my kitchen...it was drying and I have yet to move it anywhere else. It actually looks nice there. :) I enjoyed it and am glad I took the class, I do not think I really could have got a handle on it on my own. I have not however done anything else with it since. I have a bit of wool roving left over, but I want to use it to felt over some handmade soap and try that out. So I need to get more roving, but I am trying to no overload myself with buying all this new stuff that may sit there forever, like so many things right. :) I have found in the last few weeks that there has been a lot on my mind and work has been seriously stressful and physically tiring. I have been left with little energy when I am home to even muster the strength to do anything. Which is very sad, which is a hard spot to get out of. With all the thoughts lately of whether to go back to school o try and have kids, it is very frustrating. And eh it gets pretty deep with past issues of trying and what nots etc so I will not get into that, but to say the least I am as of late, just not sure what to do. And my husband saying what will happen will happen etc attitude is all good and well, I know he means well but you know when you have hard time conceiving, well that just dos not cut it, you have to give it some help! Anyway, enough on that! I will share my pictures of the first yarn I made!

It is a bit clumpy here and there, and that is all about drafting, which defiantly takes practice to get it to go the way you want it to every time. I do want to practice on that because I would like to make a overall thinner yarn. The pink bit of yarn is jut where I had it tied together when I was soaking it so it would not fall apart. 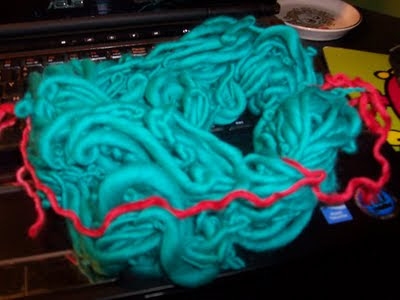 Posted by Desiree at 9:03 AM No comments:

a bit of an update

Well I really have been out of it. I do have a good few many things as far as quilting, and the yarn I made in my drop spindle class and some paper I made to post, but I just have not. I will try to do that Monday morning when I get off work. I could use the holidays as an excuse but that really only took abotu 2 off my days. I have been moving a bit of furniture and unpacking a bit more but really I slept too much and watched way too much tv. SO bleh. I was really trying to be more productive but it seems after two days of that I got stuck in a bad mood and found that I was happier in the bed or watching a movie. I so dislike it when I get like that but once I am there, it is indeed so hard to get out. SO I do hope to get some pictures up of the things I have been doing. Plus I have many things I HAVE to finish, on a deadline, that I hope to get all those done.
Posted by Desiree at 2:27 AM No comments:

Thank you for following!